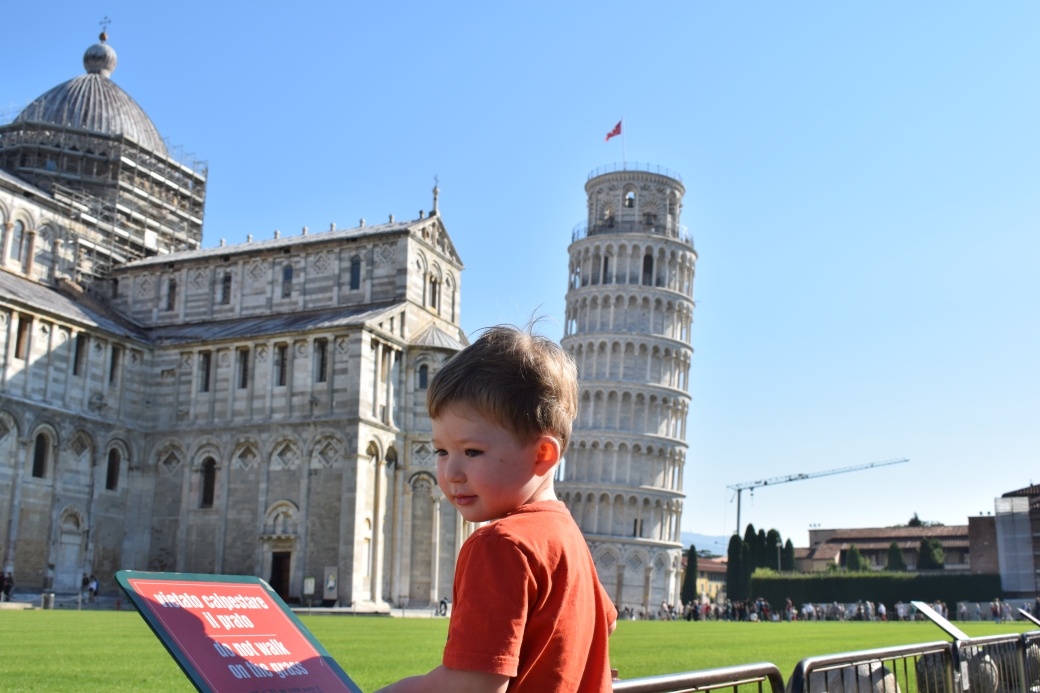 This trip was booked to Pisa after a cheap flight came up to fly from Leeds to Pisa for around £130 return for Ben and me. I tend to browse flights daily on my favourite ap, it is literally one of my fave things to do while I day dream of what the adventure could entail. A few minutes later the flight was booked for a 4 night stay. This was mine and Bens first true solo trip so I was full of excitement and anticipation as well as nerves and the hope I’d be ok looking after us both which I was and it will be remembered as an all-time favourite trip that’s till fills me with happiness when I reminisce.

I’ve been to a few other places in Northern Italy and knew from experience that the train system is fantastic and very easy to use so I loaded a map and looked for other towns or cities around Pisa as I’d read that other than the leaning tower there wasn’t a great deal to do and see there. I wanted to be based in Pisa as there was a great rail network and also close to the airport which as a lone traveller with a young son this is very handy. Florence stood out as the nearest city to visit and one I had always looked at pictures of imaging myself being there so that was added to the ‘to-do list’ and I looked at the map again. To my delight, we were not far from Lucca. Many years ago I started a list of places I’d like to go too and Lucca had been on there from watching a Top Gear episode where the presenters had to manoeuvre their way around the the tight streets and Renaissance walls, the place looked amazing and it lived up to expectations (see separate blog on Lucca).

The basics were in place for a great stay with a couple of day trips from Pisa. I browsed hotels on another ap that I always use for hotel stays and found one close to the airport and opposite the train station. It was a 4 star, I’m quite picky with hotels and blame my teen years from working in a high end property leaving me only wanting 4 star and above. As you will find across Europe, unless you go with a major brand then 4 star rarely means 4 star. I booked the hotel after reading good reviews and I was happy enough with my choice.

As we were flying from Leeds (90 miles from home) I chose to stay the night before in a hotel nearby. Again I chose a 4 star with a pool and leisure club set in beautiful grounds so Ben would enjoy himself and we could really start our holiday in style. We drove to the hotel as I had checked ahead that I could leave my car there for 4 days free of charge and checked in before being shown to our room. We immediately headed to the pool and had great fun splashing and playing together. We went for a walk and had dinner then an early night before we were heading off the following morning at 9am. Ben had brought his books and toys for the plane so he entertained himself while I made sure we had everything. Morning came and we headed for a delicious breakfast to set us up for the day. Our taxi arrived before we knew it and ten minutes later we had arrived at Leeds Bradford Airport. 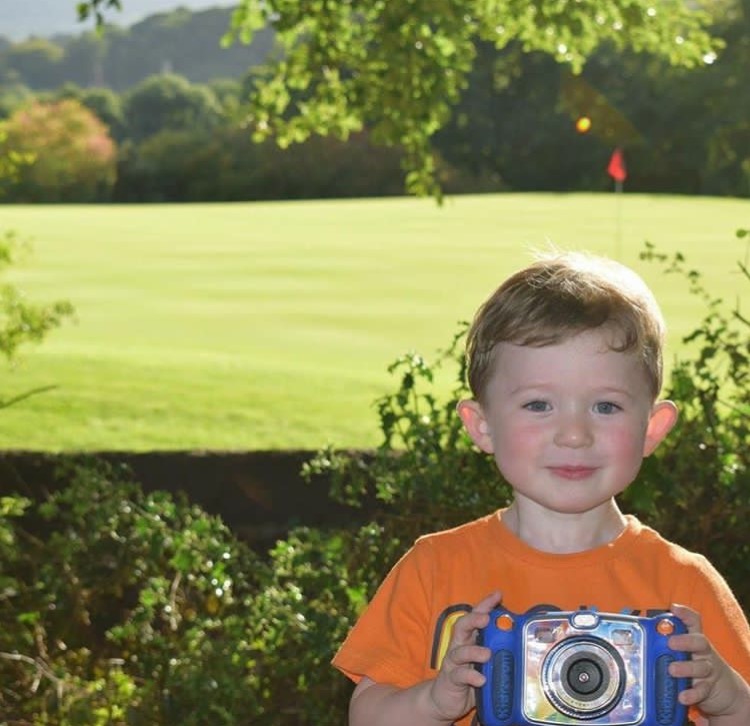 The flight was fine (only 2h 30m, Ben was great as per usual, eh slept on take-off for around an hour then I keep him entertained with movies on his iPad or with books and airlines tend to have great snack boxes for children with healthy treats and games included so that is one of his highlights. I always travel with hand luggage only too which makes it easier for me carrying a back pack and pulling Ben along on his trunki which he loves. We did have an episode on the trunki in Paris airport but that’s another blog. Id arrange a private car to collect us from Pisa airport and I love arriving to our name on a board in the arrivals hall. If flying to Pisa again I wouldn’t use this service and id just hop on a bus as literally 5 minutes later we arrived and id paid something like 35 euro for the transfer. Our hotel as described was next to the train station and we checked in easily enough and had a room on a high floor as requested. Id also forgot my travel adaptor and reception kindly had one to lend me for the duration of the trip. Once we unpacked we headed out the door to explore the local area.

First impression of Pisa wasn’t great as we had headed in the wrong direction to a rather run down area. After a good thirty mins walking we found the main street which was full of great shops and outdoor restaurants. We stopped for pizza and pasta and a bottle of Birra Moretti for me. Ben only ever wants water when we are on holiday, I think he likes having a bottle to play with. After dinner, we wandered more and Ben loves a statue hunt and gets immensely excited when he finds one and must pose for pictures. On the way back to the hotel we stopped for water and wine for our room and headed back for baths and an early night.

The next morning we were up early and headed for breakfast, another of Bens favourite parts of holiday. I think he loves the variety of a breakfast buffet as tries absolutely everything. He is like his mammy loving food. We filled up and after a 5 minute look on trip advisor on how to find the Leaning Tower of Pisa we found the correct bus stop, purchased tickets from the shop inside the train station and jumped on the bus. Ten minutes later we arrived at quite a busy road with a lot of market stalls and jumped off. I couldn’t see the tower and wondered if id got off too soon. After following the crowds 100 meters or so we went through an archway and there it was. I was so excited, it looked exactly like a postcard. It is a really beautiful site, I could sit looking at it for hours but with a toddler that is impossible. We went for a closer look and ben stopped to play in a fountain nearby as it was really hot. The tower is actually the bell tower of the cathedral. It leans due to soft ground on one side being able to support the weight of the tower. The tower is 55meters high and has nearly 300 steps inside which you can book to walk up but we didn’t. Also on the site of the tower is the cathedral as mentioned and the Baptistry which we spent some time sitting looking at. Ben made friends with some children and played a while. We left, had lunch and headed back walking to town as the buses were really full. It took around 30 minutes and I followed the maps ap on my iphone which is really handy as we get lost a lot. We walked along the Arno River which runs through Pisa and onto Florence, it was a picturesque walk which we enjoyed more so by the ending of it with delicious sorbet. 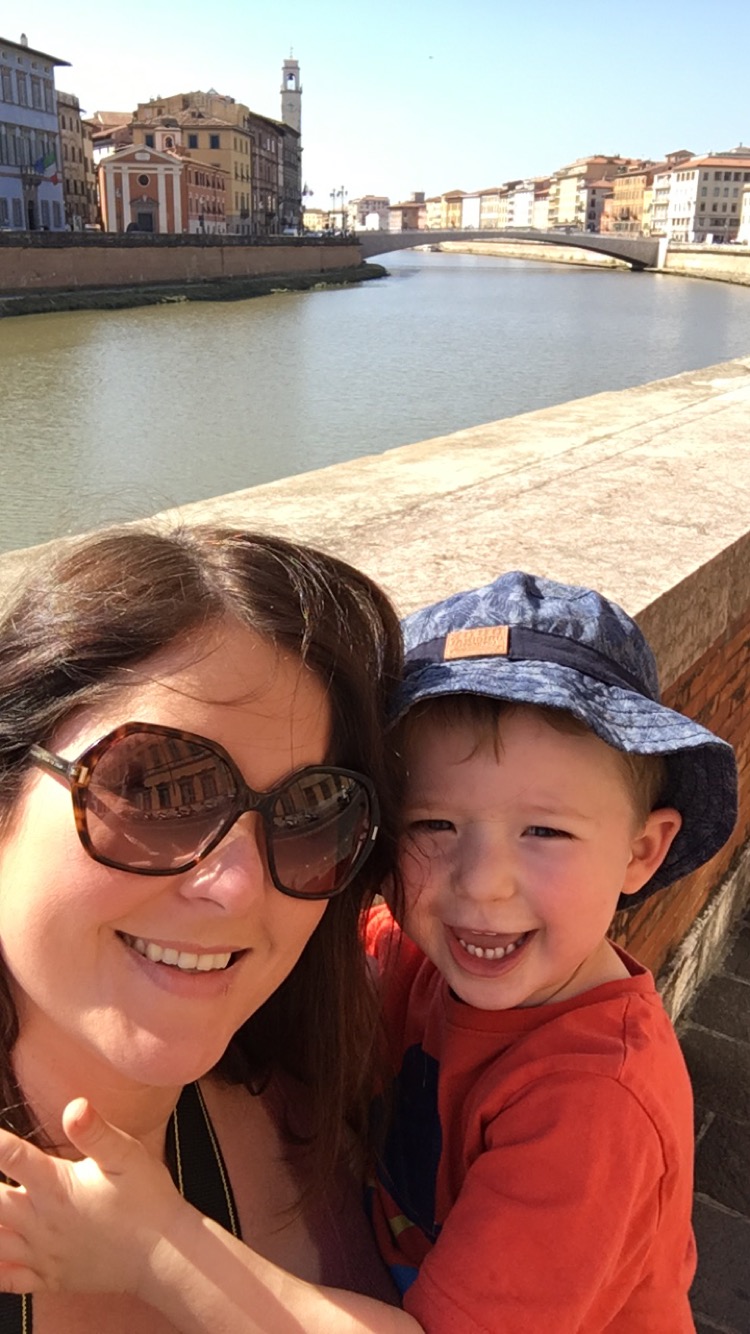 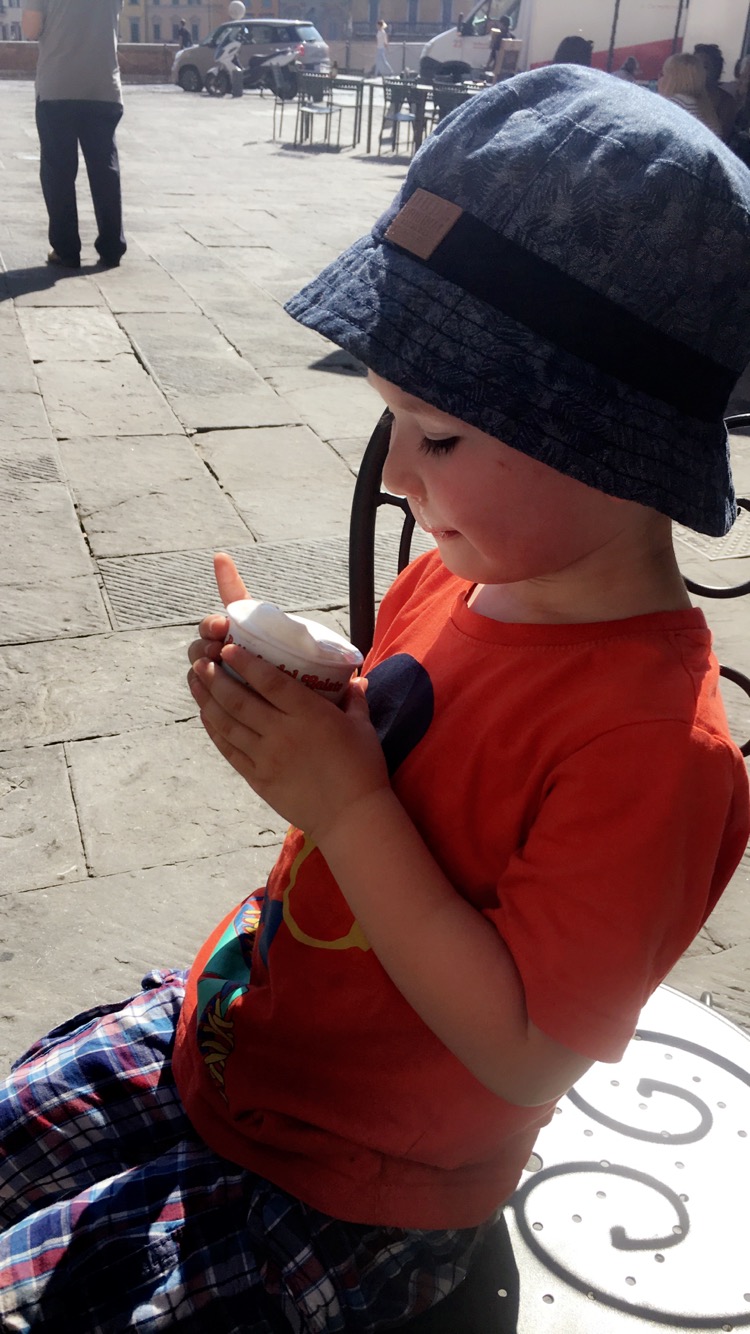 We went back to the hotel, napped as we were worn out. A couple of hours later I woke Ben and we got ready to go out for a walk and to find a good restaurant. I’d done some research on Trip advisor and found a great restaurant called Il Bistrot which was set in Piazza Chiara. I am so pleased I found this square as it was delightful. We eat quite early unlike most tourists as I’m with a three year old meaning we are usually back in the hotel by 10 at the very latest. This is to our advantage with restaurants usually as I don’t need a reservation and this restaurant was popular. We got a table for it opening and I sat outside so Ben could freely run around the square. He made friends with some local Italian children and played for hours in-between running back to sample various food id ordered. I started with my usual glass of Chianti which was divine. I had ordered a cold meats selection for my appetiser which was accompanied by some battered bread I believe it was, Ben loved this. Then I had pork in blue cheese sauce and a pasta ragu for Ben. We finished with some apple pie (not like any English apple pie and simply delicious) and a cappuccino. All in all, it was a fabulous restaurant that I would recommend. I even posted a trip advisor review I was that impressed. We ended up coming to this square every night as it was lined with restaurants so we sampled one each night. 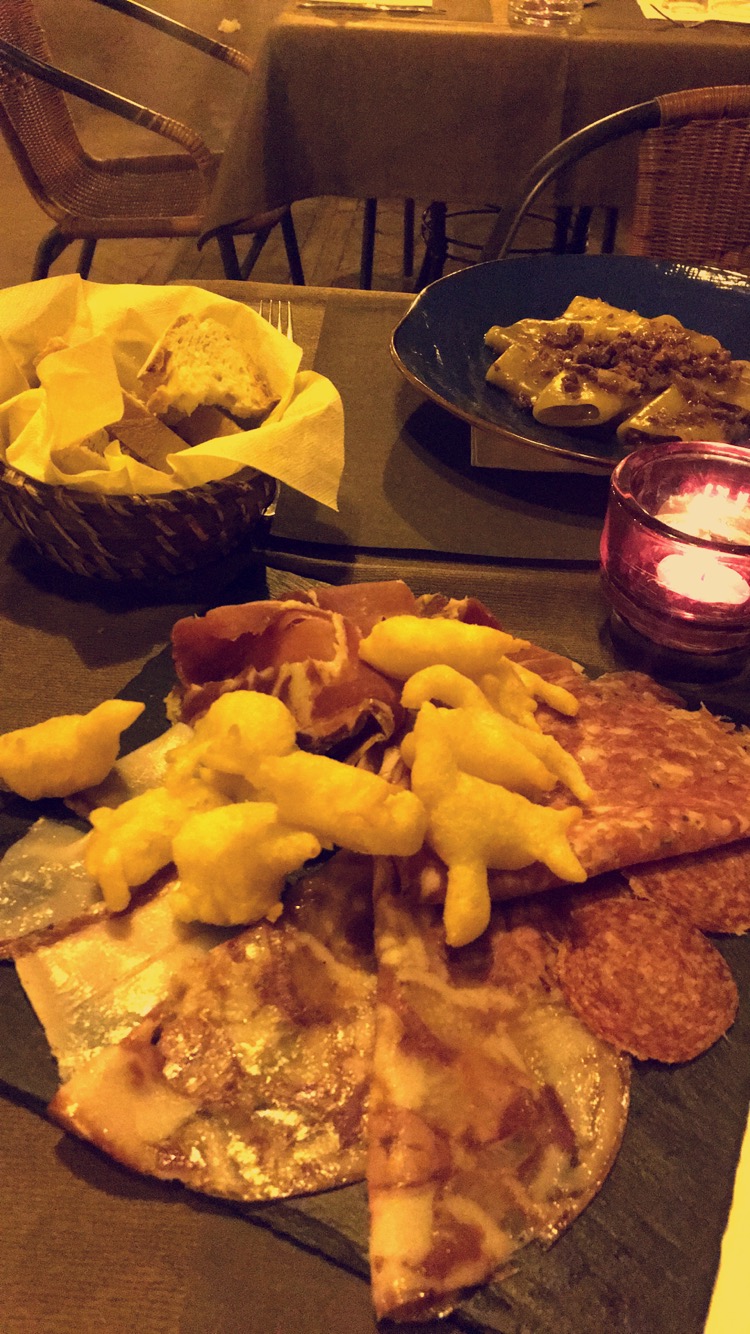 To finalise this blog on Pisa, it is somewhere I would only use as a base there isn’t a great deal to see here. Flights are cheap, hotels are cheap and having the rail link is great for onward journeys as you will see in my other blogs on Lucca and Florence. 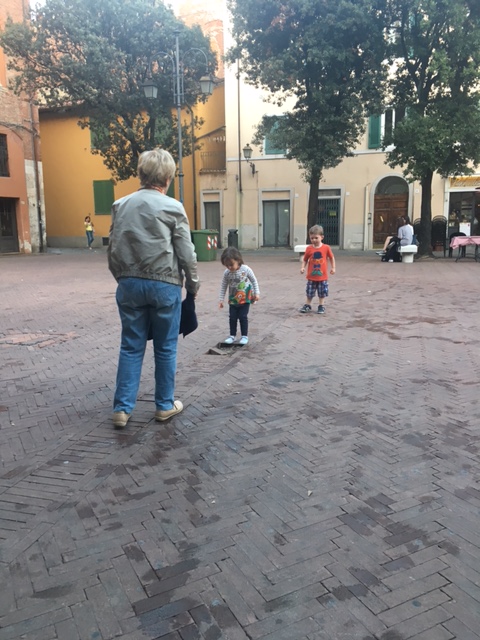